Editors of GayTies.com The CDC is recommending that "men who have sex with men" (as well as many trans and nonbinary folks, and sex workers) reduce the number of "one-time sexual partners" for a while to help slow the current monkeypox virus (MPV) outbreak. But that doesn't mean you still can't enjoy sex!

So on your knees, it’s time for a lesson. These are tips and pointers that anyone can appreciate — 24 tips for giving amazing head.

1. Start with your clothes on. Taking off clothes can be one of the hottest parts of sex — don’t rush it. Touch him everywhere except his intimate areas. When you finally rub his crotch, you know you’re doing it right when you hear that audible gasp, which means “Oh, my God, you finally went there.”

Massage his dick through his pants for a little bit — gently so as not to cause any discomfort. Make a show of pulling his dick out. Do it slowly, and if he’s wearing an elastic waistband, make sure you don’t accidentally release it and pop him in the balls. This can be very painful and break the moment (unless he’s into ball torture, in which case, by all means, pop him again). Look at his dick first before you dive. Kiss it. Study it.

2. Don’t rush. Take your time. The full range of intimate body-on-body experience is yours to use, so don’t feel like you have to fit into a prescribed, hackneyed script, which you may think goes something like this: make-out session, followed by a blow job, then possibly a rim job, with a finale of penetrative sex that ends in orgasm.

Yawn. There’s so much you can do to get comfortable and excited — even before the clothes come off. I love kissing and touching. This can be the most intimate part of sex. Drawing out those early touches, those first stray hands, builds excitement and anticipation, and confidence. Go slow, and let the moment evolve naturally without an end goal in sight.

3. Foreplay is really, really awesome. Enjoy it — and stop thinking of it as “foreplay.” Foreplay generally describes acts that arouse and titillate you and your partner before some kind of penetrative sex. Some sex acts — blow jobs included — are often relegated into this category, as if they are “lesser” sexual experiences than penetration.

Here’s a fact: Some people can’t have penetrative sex. Various bodily conditions render some unable to. For others, penetration simply isn’t pleasurable and may never be. And sometimes the stuff we call “foreplay” is simply more fun.

Start by touching him. I love rubbing shoulders, rubbing legs, easing his body into mine, and helping him relax — all well before my hands move to his crotch area. Again — don’t rush.

4. Get into blow job headspace ahead of time. It is an old truth that the best head-givers are ones who move on a mission. There is no “What do you want to do?” foreplay debate — you’re there to suck. You’re in the mental position to give head. You’ve gotten yourself into headspace before you started. You’ve been eying his bulge. You want it.

I have to prepare myself some time in advance that I’m going to suck. I want my mouth to be clean and fully digested from my last meal so I don’t immediately cough it up. If I move on a mission, once I’m there and can fully submit to his cock, I’ll close my eyes and enjoy it.

5. Flick the frenulum. A classic trick. The frenulum is the underside of the penis head, which for many men is the most sensitive part of the penis.

I generally always start by kissing the tip of the penis — the head — then moving down to the underside with the tip of my tongue. I’ll move up and down the shaft with a series of light, gentle kisses before licking the rest. This helps me get an idea of its size and texture and smell — the hottest part for me — and gives me time to build up some saliva. When you’re ready, start with gentle flicks on the frenulum with the tip of your tongue. Flick it back and forth, up and down, slowly creeping your lips up over his head, then backing off. The heat from your mouth and your breath will make him throb with anticipation — practically begging you to slide it in your mouth. 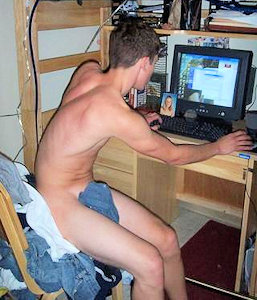 GayTies is a free website. It’s free to join and over 85 percent of its content is free to all members. Gay videos of group sex, male public nudity, guys naked in public, and naked men in public pix are all part of this exciting website. Online nude men in public, as well as online naked men in public, are favorites on GayTies. Yes, a few items are reserved for those who pay a small fee and we appreciate those members who purchase a paid membership. Even free members get to see more gay s & m videos as well as gay s&m videos. Male kink videos are big on GayTies. However free members can use and enjoy all the basic features of GayTies such as free male massage videos, videos of guys being massaged, male on male massage, also known as m4m massage, and m4m sex videos and photos.

Gay doctors and straight patients are huge like all guys in medical exams many on hidden cameras or spycams. A second popular topic is guys naked on the beach or nude males on the beach. Spycams include those caught naked at the beach. And, gay sex on the beach. All are beach spycam footage of men.

Then there are guys caught sleeping naked and guys sleeping nude on video, also on hidden cameras. Creepy videos of guys sleeping and sneaky video cams are great.

So you may join GayTies.com, pay nothing, and see 85% of the videos, and nearly 100% of all other content. Other features that free members get are free games and puzzles, free gay news and horoscopes, free member messaging, free profile search, free date match, free sex match, and a biggy, free 24-hour support from our USA staff.